Days out from Camping Didota 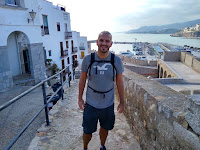 On our first full day at Camping Didota on the east coast of Spain we decided to cycle to Peñíscola. Google Maps said it would be a ride of two hours and twenty minutes. We forgot that Google's cycling times are based upon people faster than us and it turned out to be a six-hour-plus round trip.

It was a pleasant ride on quiet rural roads through farmland and orange groves and later on stony paths through a nature reserve. We hadn't used our bikes since our last holiday and so we did find it hard going, particularly on the uphill sections. The additional time we'd taken just getting to Peñíscola didn't leave us long to explore, particularly not if we wanted to be back at camp before dark. 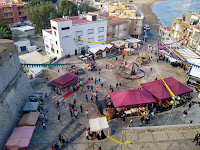 We locked our bikes between the new town and the old. Walking towards the13th-century castle we were pleased to find a medieval market selling crafts and hot food. We bought a slice of pizza each, heated while we waited in a wood fired oven. We spent an hour exploring the cobbled streets and enjoying the views of the Mediterranean from up high in the historic town.

The coastline, when it comes back into view, is a stark reminder of what Spain's seaside looks like with endless high-rise hotels as far as the eye can see. Peñíscola is a little rose in an expanse of thorns and well worth a longer visit than we could afford.

The cycle home was punishing. Our energy levels were depleted and our bums sore from saddles we'd not sat on for three months. We arrived back at the campsite at 5.30pm as it was beginning to grow dark. 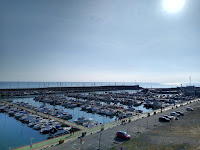 We didn't give ourselves the opportunity to rest the following day when we set out on foot. We intended to walk only as far as the harbour in Oropesa. When we came to the harbour we spotted the Via Verde, a long and straight footpath and cycle way on the route of a former railway. Seeing a tower not far along the path we decided to walk a little further.

The Via Verde was well used that day and we saw more families along this route than we we'd become used to seeing out and about in the off season. Arriving at the tower we were sad to find the spiral staircase locked; we wouldn't be climbing the tower as we'd hoped. Consulting Google Maps and finding we were already well on the way to the next town of Benicassim we decided to keep walking. Our tummies were starting to rumble and I found that there was a Lidl supermarket we could arrive at at 2.35pm, 25 minutes before its Sunday closing. 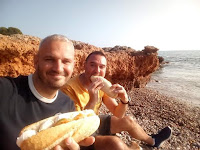 We bought bread rolls, ham and cheese, plus some beers for a picnic on the beach. With two and a half hours to walk back to the campsite we didn't sit around for long. We added blisters on our feet to our saddle-sore bottoms and determined that really must plan a more relaxing day.

The following day we caught the train to Valencia. We were up at 6am to walk to Oropesa station, taking a torch to see our way along the beach. It was still dark when the train left at 7.47am. Though it was light when we arrived an hour and a half later, it was colder than we'd dressed for. While waiting for Primark to open at 10am, we bought breakfast at McDonalds where we were amused when the self-service touchscreens gave us the choice between the sweet and salty menus. I ordered a sausage McMuffin as you'd find back home in the UK. For vegetarian Tony he opted for a potato tortilla in a muffin which came with fries and was rather a lot of potato for that time in the morning. 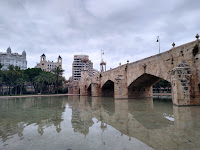 Tony was wearing shorts and so bought himself trousers, a long sleeved shirt and scarf. I needed a hoodie but rather than spend ten euros on something not particularly special in Primark I spent 20 euros in Pull and Bear and got something I liked. We walked back to the train station where Tony changed in the toilets. With us both wearing more appropriate attire we went off to explore Valencia.

During the train journey I'd done some research into the sights we ought to be looking for. We went to the central covered market to start with. It's listed as a must-see because it's one of the largest covered markets in all of Europe. It was unremarkable as far as I was concerned. If we'd needed to buy food then we'd have been spoiled for choice, but aside from food stall after food stall there wasn't any more to see. I'd enjoyed markets in Copenhagen and Florence far more with their coffee and wine bars and quirky eateries.

We went off to see the street art next with the map leading us to one street in particular. As we got nearer the streets began to be filled with stunning murals and we'd seen so many by the time we arrived at the designated street itself.

The cat house was next, a small house painted on a wall with a hole for a door. There's not much to see but apparently there's a legend that says the former owner of the building behind left it as a refuge to stray cats. We didn't see any cats, so who knows if it's true or not? 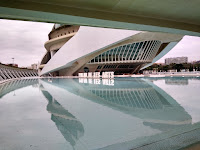 Jardín del Turia is a nine-kilometre-long, meandering park running through the city on the dried up river bed. The river Turia was diverted to prevent the flooding of the city and in its place are lawns, gardens of palm and orange trees, sculptures, exercise equipment, fountains and ponds. Passing under 18 bridges the park also contains a 70 metre-long Gulliver upon which children can climb before sliding down his hair like Lilliputians.

The highlight of Valencia for me were the futuristic complexes of the City of Arts and Sciences. One of the twelve treasures of Spain, the architecture really blew me away. I took copious photographs, none of which did any justice to the awe-inspiring buildings. A market and food court spanned the length of one of the water pools and we'd have been tempted into mugs of mulled wine had there been anyone manning that particular stall.

I wouldn't have paid the entrance fee to enter the cathedral to see the holy grail and so we gave that a miss, ending our day out with lunch at, of all places, Taco Bell. Never having had the opportunity to visit a Taco Bell I couldn't pass up the chance. If anyone else feels the same, take it from me - it's really not worth it, particularly not in Valencia where the staff are miserable as sin.

Back at the train station a train heading to Barcelona said it called at Oropesa. I was concerned at something else the sign appeared to be saying, getting the impression that at some point on the journey the train would split and go in different directions. I asked a staff member which train I wanted for Oropesa and she simply said platform two, so we took the chance. At one point we did stop briefly outside of a station and so whether some of the train did detach I don't know, but we got home and, like when we'd left that morning, it was dark again. 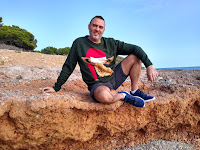 We had two full days left and decided we'd really had enough exercise and we'd take a more relaxed approach. We cycled back into Benicassim, a half hour ride along the flat Via Verde. We bought a picnic lunch from Lidl and enjoyed it in the sun in a small cove about half way along the Via Verde back towards the campsite.

Our last day saw us walk along the boardwalks to the north of the campsite into an area of nature parks rather than hideous hotels. Then we retraced our steps to spend a little longer in the Marinà D'or park than we'd managed to when passing it previously. It's an expansive enclosed garden with water features, bizarre sculptures and wild and caged birds that's just behind the beach between Camping Didota and the town of Oropesa. It's a real diamond shining in the rough.

With a long journey back to the UK via Calais ahead of us we left Camping Dodita at 8am for an overnight stop near Avignon and another stop somewhere closer to the channel the next night.