This morning we were up by 7.30am and ready to shower before an early ride up to the ski resort. The hot water had other ideas but neither Tony or I, in our shower attire were willing to ask what the problem was in reception. We washed the important bits and dressed for skiing.

Brun Sport, the shop keeping our skis and boots for us, was quiet at just after 8.30am and we were in and out quickly. Today we decided to keep our shoes on to walk to the slope before changing into our ski boots. Ski boots are a total bastard to walk in, hurting your calf muscles and giving your legs friction burn.

As we walked to the beginners slopes the snow machines were pumping out a fine mist all across the the mountain. They were still going while we started to ski, giving a chilly sprinkling of snow as we darted underneath.

Being so early meant that the queue for the ski lift on the easiest slope, Petit Viking was short and we managed about ten runs, gaining more and more confidence each time. We mastered turning with ease and eventually we decided we could cope with the bigger slope that we'd given up on on day two. 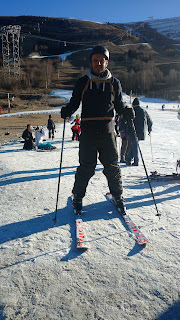 Still a beginner's slope, this one was steeper but I was quite happy skiing across the slope on the diagonal, keeping the gradient at a level I could manage. The only problem, that I did not foresee, is that once you've crossed at a diagonal to the other side you need to turn to cross back. For just a moment while turning, your skis will be facing straight down the hill. That moment, for me, was all it needed to turn my gentle meander over the snowy slope into a full-on pelt downhill. I fell arse over tit.

Once I was finally upright again, I only managed to get down by stopping each time I reached the side of the piste, taking off my skis, turning then round and putting them back on. I did this three times until I was at the bottom and we called it a day.

Skis safety deposited at Brun Sport, we caught the ski lift up the mountain for a gentle walk back into town. We caught another ski lift up to La Bergerie Kanata for lunch in the sun.

After a leisurely lunch, feeling chilled as can be, we walked down into town where we mooched around the shops until the swimming pool opened at 3pm.

We bought vin chaud, mulled wine, from a small Italian delicatessen and sat at a table in the street watching skiers walk by, carrying their equipment after their day on the piste.

And that was the end of day four. It's now 6pm and Cleopatra has warmed up nicely. There's an hour until the campsite sauna is all ours and I'm looking forward to the heat easing my aching muscles!
France