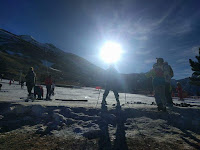 This is our second December break in the French Alps. We're on the same campsite, in Venosc, a ten minute cable car ride away from Les 2 Alpes ski resort. After our 8.50am tunnel crossing, we arrived at 6.20pm. The site is under new ownership and, upon discovering our lack of French-language skills, the guy who came to meet us at reception asked us to come to the bar where his wife dealt with English speakers, while he was more adept at Italian. We were shown to our pitch and soon were ready to pop into the village for a drink. But it was Boxing Day and everything was closed.

We walked back to the campsite and decided to have a drink in the bar. The husband served us, with better English than he had prepared us for. He gave us a menu and we chose a wheat beer. He said that was for summer, even though we're familiar with what it is and wanted to drink it. He said we should drink Christmas beer, though he would say that, being Boxing Day and obviously having it left over. We took the advice and it was a nice ruby ale with spices. We drank up when the two other groups had left and we were all there was stopping the couple closing up.

The difference between our holiday here last year and this year is that rather than just watch others skiing from the comfort of a bar, we've bought skis of our own. We just never got around to having lessons. 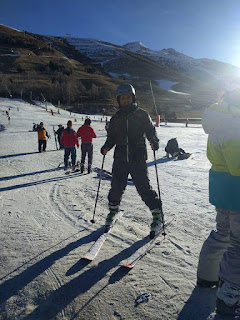 We'd have liked to do a six morning ski course but it began the day after we arrived and we couldn't get up into Les 2 Alpes in time to book it. We stood for half an hour in a queue to buy a ski pass in Venosc with just one of the two kiosks open, and it taking an absolute age to serve each person. So we decided to learn through practice. And listening to dads teaching five-year-old children how to do it.

Knowing how to stop seems to be most important. I spent morning number one on the most basic slope trying to go as slowly as possible. All was going according to plan until I lost my ski pass while taking my phone out of my pocket. With the receipt, a duplicate ski pass can be obtained for a seven euro fee, so all was not lost.

We found somewhere to leave our skis in the town so we could enjoy an afternoon of apres ski, and headed up to La Bergerie Kanata for a carafe of rose wine and a light lunch. We'd stumbled upon this lone restaurant on the west of the valley last year and enjoyed afternoons sitting in the sun with the most reasonably priced drinks you're likely to find here.

We spent an hour in the outdoor, heated swimming pool, included in the price of your ski pass, and then got the cable car back down to Venosc for a quiet evening playing boardgames in the warmth of Cleopatra.

Day two saw us in town much earlier. We collected our skis and decided the beginners' slope nearest to where they are being stored was as good as the one we tried the previous day. Unfortunately from the top it was much steeper than it looked from the bottom. I took my skis off and refused to go down, while Tony just went for it, falling over in seconds and taking ten times longer to get back up.

At the base of the mountains there is only snow on the slopes, created by snow machines overnight, so I walked down the grass to about half way, where it was less steep. Even there I wasn't very much in control and we abandoned the slope in favour of getting a coffee. Coffee became a large beer each. Then we walked to the really easy slope where I mastered going from top to bottom without stopping, albeit going at snail's pace, three times. At which point skiing day two ended in favour of lunch and swimming.

Cleopatra, from where I am writing this blog post, has taken an age to warm up, and now she has I need the bloody loo!
France