Last year when we stayed in Venosc we spent all of our days up in Les 2 Alpes, only discovering dozens of walks back down near to camp as the holiday drew to a close. One walk I particularly wanted to do was to Lac du Lauvitel, the pictures of which looked stunning. So, after two days of ski practice, I persuaded Tony we should do this walk.

We were up out of bed as the village churches were, two minutes apart, striking eight. We'd dressed ourselves in many layers and were off on our way by 9am.

Despite being a beautiful day with clear skies once again our entire walk was in the shadow of the valley. That made for a cold but atmospheric trek up to 1,500 metres.

The first half of the distance was alongside the river. Once the route turned at right angles it was uphill for the rest of the way, at an unrelenting gradient. Tony doesn't do hills very well - I walk at a reasonable pace for a minute, look behind me to find Tony has covered less than half the distance I have. I wait for him to catch up but then he has to rest too. So the estimate of the time it would take to reach the lake that Google Maps was giving could be multiplied by about three. 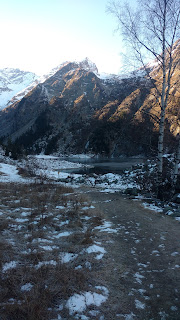 As we climbed higher there were waterfalls, but also sections of path covered in inches-thick ice. It was even slower going than Tony's usual speed.

As the time neared 11.30am I started to worry we'd have to give up; I didn't want any of our return journey to be after the sun had gone down. Finally the map showed that the path was straight ahead instead of snaking as it had done for the rest of our accent. I said to Tony that might mean we'd reached the same altitude as the lake and I was proved right.

We reached the lake at 11.40am. It was a dark, gloomy blue, nothing like I'd seen in pictures. But at that altitude there was complete peace - not a sound from anywhere and mountains climbing higher still all around. It was serene.

We only stayed a few minutes, enough time to snap photos, and then we headed back the way we'd arrived. I was more worried about the ice on the way down and looked for a couple of sticks we could use as walking poles. We both started out with flimsy sticks, but a few upgrades later we had perfect walking sticks. Even so, half way down Tony fell hard on his knee. He seemed to roll twice before coming to a stop, clutching his knee like it might be broken. And I thought skiing without professional lessons was what was going to be responsible for broken bones on this holiday.

We're still waiting for the bruising, but Tony's knee isn't broken. The walk back took much less time and we were back at the campervan at 2pm. We left some of our backpack contents and went straight back out, heading to La Bergerie Kanata for a late lunch.

The ten minute sit down in the cable car up to Les 2 Alpes was welcome, as would have been the courtesy bus from one end of the town to the other if we'd caught it. We took another ski lift up to the restaurant and were there just before 3pm. Our steak and chips for just 10€ were delicious and we'd just finished them by the time the sun went behind the mountains. Woah did it get colder! We still had half a carafe of wine and the waitress suggested we move indoors where there was a log fire. 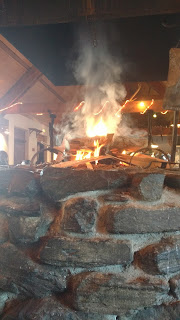 A huge open-plan barn was filled with long dining benches, a tall open fire the focal point of the room. We sat right next to the fire and enjoyed the rest of the wine. The restaurant is mine and Tony's favourite part of holidaying in Les 2 Alpes. Sitting on the sun terrace enjoying delicious and inexpensive food and wine in the early afternoon is delightful. The warmth of the fire in the log cabin restaurant with a stunning mountain landscape out of every window made us love it all the more.

Our daily ritual has us swimming in the outdoor pool next. The sun was down there too and it proved just little too cold with wet hair.

Finally before our return down to Venosc we shopped for beers and dinner ingredients at Carrefour where a charming black cat seemed to be a firm resident. He was in and out of all the tills, rubbing around the cashiers' legs.