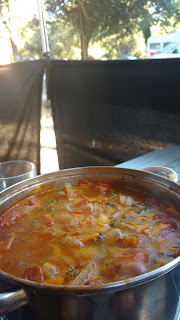 Food is right up there in things that make a holiday memorable. Now we're camping instead of using room-only accommodation we're cooking our own meals rather than eating in restaurants. Taking an average meal for two, including wine, to be around 50 euros, we've saved 700 euros over two weeks. That will pay for tunnel crossings, fuel and site pitches for another holiday.
And cooking is not a chore when you're sitting outside somewhere beautiful in the evening sun with a few beers. In our fortnight in France we've made some fabulous meals, all the more enjoyable for having prepared them ourselves on our single electric hob.

We have with us on this holiday three means of cooking, two of which we were unable to utilise because no fires were allowed in the forests in which we were camping. So all food was cooked on our electric hob. An extension lead allows us to use this at a table outside.

You can be as adventurous as you like in French supermarkets. For meat there is a wealth of duck, and horse steaks are something you'd not see at home. There are snails if that's your thing, plus most of what you'd expect to find at home.

Sausages featured several times in our purchases. French sausages are lush and comprise of all most entirely meat - none of that 68 percent or even 47 percent pork you'd buy in Britain. We made diced beef into a Greek stifado on one evening, and made a paella with squid on another.

Our camping larder contains the essentials to turn basic ingredients into gastronomic delights. Tony's favorite spice cinnamon and favorite herb dill are great for the Greek dishes, while my favorites cumin and smoked paprika are great for spicy dishes such as chilli con carne.

Also in our larder are pasta, rice and lentils, plus tins of sardines and pulled pork, and tubes of tomato puree and anchovy paste. We'd feed ourselves for a week just on what we carry around.

The simplest and cheapest meal we made was also the best. Pasta putanesca required only the purchase of a tin of tomatoes and bulb of garlic. Also in the sauce are anchovy paste and black olives. So simple and yet so full of flavour, you'd not find a tastier dish in an Italian restaurant in Italy.

We like to cook with fresh ingredients where we can and so our supermarket shops are important. Whenever possible will try and find a large chain supermarket on our journey and stock up. Lidl is usually the best bet and as well as meat and vegetables, we've had a great five litre box of red wine and pleasant pale lagers.
Tony was insistent though that as we'd carried around two tins of pulled pork the full length of France, that we had to use one, and so for our last cooked meal, we made chilli con carne, using up four tortilla wraps from a pack of eight, plus half a jar of cornichons to add some crunch.

The French don't really do the food of other nations. Where in the UK you'd find an aisle of curry sauces, in a huge French supermarket they'll be just one, and it will just be labeled 'curry' - no clue as to which variety, but it'll not be spicy. The tortilla wraps were twice the price you'd pay in the UK and in the small ethnic foods section where you'll also find the Heinz baked beans.

While on site we order a baguette and pain au chocolat for breakfast. You order at reception the day before to collect in the morning. There's often a queue to collect the baked treats.

There are, of course, the not-so-prepared campers who have turned up expecting more local shops. At Camping Indigo Lac de Carcans we overhead a couple who had just bought beers from the site food truck saying they'd go back to buy more. They were paying almost 4 euros a bottle, while we'd paid 6 euros for a box of 24.

We were tempted to buy food to go on a few occasions. We had portions of frites a few times - a good pinch of salt added as standard, and kebabs once - and once was enough as they contained more potato than meat. We ordered expensive but very nicely homemade pizzas from the Indigo food truck one evening and, finally, we were distracted by the most enormous donuts sliced in two and sandwiched with Nutella. We justified the calories on account of our cycling so far each day.

If it sounds as though we ate a lot, w really didn't. We don't eat at midday on holiday and exist from breakfast to our evening meal on only a couple of litres of water.
When you combine the exercise we've had with our calorie intake, I'm hopeful I'll find I've lost a few pounds when I climb on the scales back home!
France