Still learning about the leisure battery

This weekend was our third consecutive non-electric equipped campsite. We're never sure what the leisure battery is capable of since in the VW California Beach, which Cleopatra is, there is no battery status display.

When not hooked up to site electric you have use of only the lights and cigarette lighter sockets (of which there are five in various useful places). The parking heater also works off grid, burning diesel to produce heat circulated by a small electric fan. 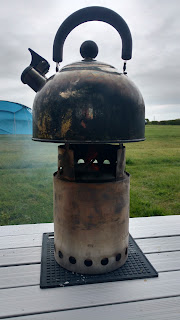 So usually our electricity consumption off grid is purely charging our phones, lights on in the evening and heater on as necessary. The battery has coped admirably with this.

Then last week I bought a coolbox that plugs in to a cigarette lighter. It was plugged in from leaving home last Friday until we noticed our phones weren't charging on Saturday afternoon.

A little investigation told me it was using 45 amps. Compared to the 2 amps a charging phone uses and it's not hard to see why the battery drained so fast.

So first lesson learned in the last few days is that the coolbox should only be plugged in if Cleopatra is plugged in.

The second lesson is that six hours of driving since last weekend wasn't enough to charge the leisure battery back up. The heater wouldn't come on at the same time as the lights this weekend.

As we're off grid again next weekend Cleopatra will be having her first every time plugged in to our house mains when we get home.

The other news from this weekend was that we made friends with a gorgeous golden Labrador called Jasper. He came over to see us while his owners were putting up their tent, ignoring their repeating calls for him to come back. He sat under our chairs seemingly content that we were paying more attention to him than they were. Jasper's owners thought kicking his football would encourage him to return but he bounded off to fetch it and sat back down with it under our chairs.

Jasper returned to sit with us on Sunday morning as his tent was being packed away. He had a little more energy as he'd only just got up and he flitted between us and two other campers eating their breakfast. I didn't get to see what he was doing when he got a real telling off, but he was in the porch of the large tent in front of us. He was made to sit in the car until his owners were ready to leave.