Healthy Roods Farm and the beginning of summer

Summer has finally made an appearance! Even in the Peak District.


This weekend we've enjoyed the summer sunshine and we didn't leave the confines of our campsite once. It's what we've been waiting for since about October.

We've been back to a small campsite on a farm in the south of the Peak District. Heathy Roods Farm is a site we've stayed at in a tent and the scenery is absolutely beautiful. It's just hills and farmland as far as the eye can see.

We arrived at 6.20pm and paid the very reasonable £5 each per night, and then we were free to choose a spot to park Cleopatra. The site consists of two camping fields. I'd hoped to pitch where our tent had been 18 months ago but a tent was already there. We chose a spot in the same, otherwise empty, field, popped up the roof, unfolded our chairs and cracked open some beers.

Neither of us had mobile signal and so undisturbed and undistracted by social media I made great headway with my Kindle books.

The sun was now behind clouds but it was still pleasantly warm enough to sit in shorts for a while. A Friday evening outside is one of the things I have missed the most while we've been camping through winter and spring.

We cooked sausages over our portable gas stove and had hotdogs for dinner. We gradually put on more clothes until, at about 9pm, we decided it was time to sit indoors. Sleep soon hit both of us and we'd moved to the upstairs bed by 10pm.

I was awake by 8am and the sun was already over the trees. I decided to boil the kettle over our wood gas stove and set about collecting the driest sticks I could find. The ground was heavy with dew so that proved a challenge, but I was determined to use free fuel while we were able.

The wood gas stove, a Solo Stove Titan, has been in the loft with other summer camping gear. Through the colder months we've cooked on an electric hob mostly, turning to the portable gas stove the few times we've not had electric hook ups. But now, preferring to cook outdoors, we'll barbecue or use the Solo Stove during good weather. 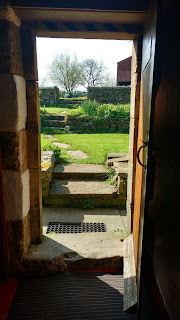 The stove is usually incredibly efficient, with just one temperature: very high. It burns small sticks, twigs or pine cones in a central chamber. Ingeniously placed holes in the outer chamber draw air in through the bottom which heats as it passes between the two chambers, coming out of the top holes as flames.

This morning though, with dew-damp sticks, it was a challenge to do anything with it - doubly annoying because of the two bags of dry sticks and pine cones I knew we're sitting in our spare bedroom at home!

Eventually I boiled the kettle. It didn't really matter that it took the best part of an hour. I was topping up my tan and we had no plans to do anything other than that all day.
I roused Tony from his slumber with the promise of fresh, hot coffee from the caffetiere, and kept the fire going to cook breakfast.

It took a couple of hours to cook bacon and scrambled eggs. The stove needs an almost constant supply of sticks adding but when you add damp sticks, rather than intensify the heat, it has the opposite effect.

Finally happy we'd be eating hot food we assembled a new breakfast creation - bacon and egg tortilla wraps with onion and red chili. They tasted fantastic, especially after two hours of waiting expectantly. It's definitely a breakfast we'll cook again; it's nice to start the day with something so tasty and exotic.

It was noon by the time breakfast had been consumed. Neither of us had showered and this was on purpose because burning sticks leaves the chef and standers by smelling of smoke.

Once clean, we did nothing more than chill out in the sun, opening a mini keg of wheat beer by mid-to-late afternoon.

Had we had mobile signal we probably would have known that it was due to rain. I heard it before I felt it, and we just had time to pack away chairs and picnic rugs before, around 6 or 7pm (no phone meant I had no concept of the time) it thundered, rained and hailed.

It's nice enjoying summer storm from the safety of the campervan and awning. It didn't rain for long but afterwards it was a little chilly to sit outside. We cooked dinner inside over gas before beer-induced sleep overcame us for our second early night. 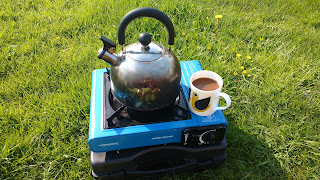 On Sunday morning there was hardly a cloud in the sky. With another glorious day ahead we were in no rush to leave and so, at a leisurely pace we boiled the kettle for coffee and cooked breakfast over gas. We don't normally plan for Sunday breakfast as we're normally packed up and on the move by around 10am, but from our camping larder I found a shrinkwrapped Polish sausage which I sliced and then fried along with the chunky potato salad I'd made at home. With the addition of two red chillies it made another ingenious tortilla wrap - actually two wraps each.

Anyway, I'm all for this summer weather sticking around. Next weekend we'll be better prepared, with dry sticks, and breakfast food for two sunny mornings!