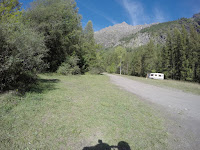 We hadn't intended on the Alps being our second summer holiday destination; it was a snap decision made at 9pm in Calais after checking the seven-day weather forecast. Although we'd have two days of showers, they'd be followed with five days of uninterrupted sun, compared to the rest of France which looked set to have a wet week.

Our course adjusted, we headed south as I scanned our All The Aires book for a well-located aire that would break the journey fairly evenly and allow us a cheap night's parking. We ended up on one of a few motorhome spaces just outside a village campsite. We were in bed by around 2am and the pitch cost just €3. 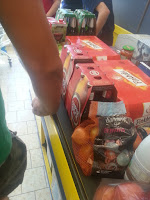 Our journey south continued for six hours on Saturday, seeing us stock up with a week's provisions at the last Lidl before our final destination.

We assumed the supermarket in the village in which we'd be staying would be small and expensive and we did really well in buying just enough to last the week: three packs of meat which did four night's meals, vegetables that lasted all week, cold meat and cheese for sandwiches, plus six crates of beer and nine litres of wine. 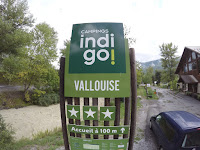 At 3pm we arrived at Camping Indigo Vallouise. Without time to research our new destination we'd decided to put our faith in the Indigo chain which had never failed us in the past.

The Indigo brochure announces, justifiably proudly, they created the collection of campsites, 'for camping,' on natural sites they'd love to pitch their tents, because there's nothing worse than dreaming of your little pitch in the wilderness only to find yourself sandwiched between rows of mobile homes with 'booming entertainment and activities.' This was to be our fourth Indigo site this year and I can happily say they live up to their promise. And I can also confirm that most other sites from other chains we've visited are unfortunately as described. 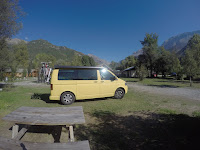 At reception we were warmly welcomed and assigned a pitch, but we were given a handful of other vacant pitches we might like to consider and if we preferred any of those to pop back and let the receptionist know.

We picked our pitch based on sun potential versus shade. Cleopatra was in the shade of trees for the afternoon and evening while allowing us to sit in the sun. We'd paid an extra three or four euros for the 'plus' pitch. These are a little bigger than standard pitches and come with their own picnic table. While we don't need a lot of room, it's nicer to know someone isn't going to pitch up right next to you. I'd say the extra expense is worth it. 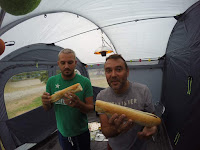 As we'd be staying for seven nights, we put up Cleopatra's new drive-away awning and then set off to discover the village of Vallouise.

Vallouise is a small mountain village situated at the junction of three valleys, on a plateau at 1,100m with stunning alpine scenery all around. In every direction you look there are mountains - it's quite disconcerting actually because, with mountains all around, you wonder how you got there. 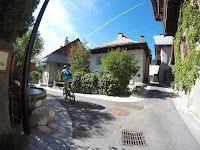 The village has several restaurants, two bakers, a small supermarket, plus hotels and log cabin accommodation. Clearly a ski resort in the winter, in the summer it's ideal for walking and mountain biking. Even on our short first exploratory scout around we found several walks signposted.

With so much to do it was rather puzzling why our campsite wasn't busier. With sunshine as hot as the south of France plus scenery more stunning I'm surprised more people weren't taking advantage. 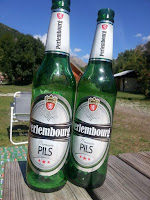 Satisfied we'd done something that day other than just travel, we put our dinner, pork stifado, on to cook, and cracked open the first case of beers, enjoying the evening sun.

The sun was short-lived, as predicted by the weather forecast, and the next day we woke to cloud and drizzle. Clearly we'd have to wait a couple of days to sunbathe, so we grabbed our umbrellas and went for a walk along the river. We walked as far as Pelvoux before heading back on the opposite bank of the river. Although sign-posted to Vallouise, I wouldn't have recommended the path on the southern side of the river - it was a little precarious in parts! 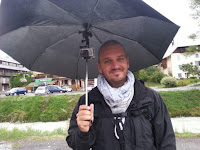 It rained hard in the evening but it gave us the opportunity to tweak the set up of the drive-away awning. We discovered it needed something to form a peak in the small section between the van and the living space, in order to keep the water from collecting. The spare set of poles it came with did the job perfectly and we were kept dry throughout the night and rainy next day. 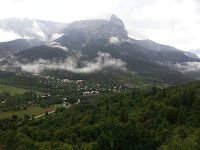 Monday was set to be a walking day again - I didn't fancy cycling in the rain. We decided to walk to the church and village we could see halfway up the mountain to the south of the campsite. We followed the signed footpath to Puy St. Vincent which proved quite a climb and much further than it looks. The views were breathtaking until cloud descended. We walked back along the winding road and hung up our clothes to dry. 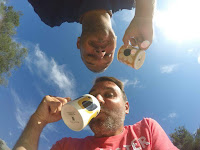 On Tuesday it wasn't raining. We enjoyed coffee at the picnic bench under blue sky and decided to do nothing more than sit in the sun with our books for the rest of the day.

On Wednesday we decided to cycle to Mont Pelvoux. Google said it would take an hour and a half. It was kind of right - we did cycle for about that long, but we also walked for the same amount of time again. It was a tough slog uphill. Reaching the end of the road we came to Pré de Madame Carle where we ordered coffee and cakes. From here there were so many footpaths to choose from but the punishing three-hour journey to this point had exhausted us. It was only a 25-minute ride back with barely any peddling.

It's worth a mention that the campsite we passed at Ailefroide looked lovely and would make a great base for further exploration of the many footpaths in the area. 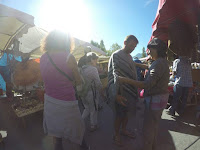 Thursday was another chilled day in the hot sun. We ventured off site for a leisurely stroll around the weekly market which draws crowds from miles away. It was huge with anything and everything for sale. We bought a hot rotisserie chicken for lunch, and I bought a alpaca-wool poncho I thought would keep me warm when winter camping in the Alps later this year. After lunch we read our books, occasionally having a swim in the campsite pool. 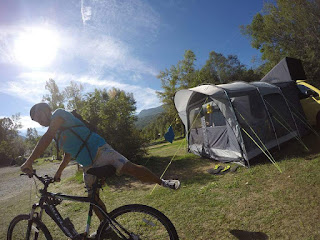 On Friday we set out on our bikes once again, this time towards Pointe de l'Aiglière, a 3,307 metre tall mountain. We cycled uphill until the road ended again. Once more we found the end of the road was the start of a multitude of paths signposted in all directions. The moral of this story is to drive to the end of the road and then set out on your walk or bike ride. But this does mean we can visit Vallouise again and have at least another week's worth of activities guaranteed.

It was with really heavy hearts that we left the Alps on Saturday. There is just too much to see and do, even with a single campsite as your base. I'm definitely sold on the Alps as a summertime holiday destination.
France