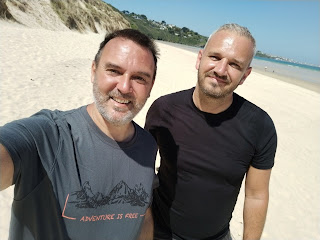 It's been a tough year for everyone and we hadn't been able to take advantage of February or Easter school holidays. In fact I worked through the Easter break so I was even more excited at the prospect of going away in our campervan.
We were ever hopeful that we would be able to travel to France or Spain but that wasn't to be. As a back up plan we had booked a campsite in Cornwall and our holiday started with a 5am alarm. Once we had our bikes loaded and an awful lot else we were on the road by 6am.

What a journey! We could check in at 1pm and we had already allowed extra travel time for bank holiday traffic. 1.35pm wasn't bad for time and soon we had set up the huge Outwell awning we hadn't used in years.

Our campsite, the Caravan and Motorhome Club site in Marazion has no facilities block so we needed the additional space of our massive awning in order to be self sufficient. The intermediate space between the van and the enclosed awning was a perfect space for our porta potty, rechargeable shower and the cool box.

The weather we arrived to was glorious and looked set to continue all week. After basking in the sun for an hour or so, just chilling out, we decided we ought to see something during the remainder of the day and set off on foot to the village where I'd read there were two pubs and a shop selling the best Cornish pasties around.

We had a pint each at the Trevelyan Arms before finding an alternative route along a lovely quiet lane to bring us back to Cleopatra where it was warm enough to still be wearing shorts at just approaching 8pm.

We had invested in a new gadget, a cheap projector and screen, and were sat ready to watch it a little bit too soon. We'd tried it inside the van and it was perfectly watchable, projecting onto Cleopatra's window blind, in bright day light. Our screen hung in the awning would need to wait for darkness. Once dark it was great to watch our usual shows on the big 100 inch screen.

In the morning the sun was beating down and I sat in the sun with a cup of coffee while I boiled our teeny kettle several times over for us both to have showers.

We skipped breakfast in the hopes of finding our first real Cornish pasties and we set of on our bikes in the direction of Marizion. Only just leaving the campsite we could see St Michael's Mount and it was downhill all the way into Marazion where we saw the sea for the first time since August. Penzance was just around the bay and so we continued on.

In Penzance harbour we left our bikes and went to look for our first Cornish pasties which we ate sitting on the wall of a little bay. Then we continued cycling to Mousehole before starting back, going inland to Paul and then back down to Newlyn on the coast and into Penzance once again. We cycled on the sand back towards Marazion for the final slog uphill to the campsite. The sun has been shining down all day and we thought that at 3pm it was time to crack open some beers and soak up some rays.

We decided the following day would be a beach day but anyone who knows us knows we're not satisfied with a beach if there's anyone on it besides us. The fact it Prussia Cove was sign posted from the main road seemed like a bad sign. The teeny car park at the end of the one track road was more encouraging. Better still people were doing what they generally do which is plop themselves down on the nearest piece of beach to where they parked. This was not, in fact, Prussia Cove. We followed the footpath for a time until we could see another cove which was the sign posted Prussia Cove. It had a number of families on its pebble beach. Just beyond it we spied a huge sandy beach with no discernible access.

Walking further along the cliff path we came to a padlocked gate and sign which said the footpath to the beach was 'foundered'. Unsure what that meant and ready to push our luck we climbed the fence and followed the path anyway. Eventually we came to the end. Three ropes we're helpfully secured to the rock and many people would have been able to get down the last bit. We couldn't even try as Tony's ankle is still in recovery from his accident in December. The only other option was to 'scramble over the rocks' from Prussia Cove as we'd read other people's descriptions of arriving at the sandy beach. That didn't seem advisable either.

We sat on a grassy ledge and ate the lunch we'd bought from the Co-op we had passed while cycling, the sandy beach taunting us below. Afterwards we decided we'd walked enough for Tony's ankle and ought to be retracing our steps. We determined the beach at Prussia Cove to be reasonably sparsely populated to sit for half an hour. I left Tony to go on a reconnaissance mission and clamoured over half the rocks between where Tony sat and the long sandy beach. I returned to tell Tony he'd not manage it.

After we decided we'd had enough of the pebbly and peopley beach Tony went to investigate the rocks for himself. He was a fair way across when I'd folded the beach towel, packed it in the rucksack and caught up with him. He was most determined he was going to reach the almost-deserted sandy beach.

We took quite a time to get there, Tony using big boulders to hold onto as he negotiated the rocks. Where there was nothing for him to hold, I became the stabilization. I was very proud of him when we set foot on the sand. Yes there were a handful of other people but the beach was so big we found a spot away from anyone and soaked up the sun for a few hours. As I had neglected to pack swimming trunks I lay on the beach in my pants!

The tide was at its lowest at 3.30pm and much of the way back was walkable on sand and so by 4pm we'd set off again for home. It was an amazing day and something I would not have thought possible to do. A holiday high on day three. We discovered the beach we found is named Kenneggy Cove.

Fancying a beach day again the next day we cycled across to the north coast to find Porthkidney Beach. It is separated from Hayle Beach by a river mouth. Everyone is on Hayle Beach even though just a 20 minute walk across the sand dune behind the beach will bring you to the almost deserted Porthkidney Beach. The next nearest people to our beach mat were at least two football pitches away. Any scepticism about an away-from-the-crowds holiday in Cornwall was well and truly swept away.

We cycled to Wheal Prosper Tin Mine the following day and after that to Praa Sands. There's access at the easterly side of the long sandy beach where there were very few other people compared to the westerly end which looked busy. As always we just walked a few hundred feet along until there was absolutely nobody.

On our last full day we walked to Marazion following public footpaths indicated on Ordnance Survey maps. The mapping was quite right about the paths but it looked like many hadn't been used in a long time. A machete would have made progress quicker and we both were stung by nettles many times.

We decided not to join the queue at the bakery for pasties and went to the chippy where the queue was shorter and better socially distanced. We ate fish and chips on the sea wall with a view of St Micheal's Mount. We didn't get to walk across to the island because the tides didn't do what I expected them to do. That is I thought that if low tide was 3.30pm a couple of days ago, it would be near enough the same today. How wrong I was. It was almost high tide.

We weren't disappointed for long though and I was soon Instagramming my pint of Cornish ale in the beer garden of the Fire Engine Inn with St Michael's Mount behind us and the sun shining down on us. 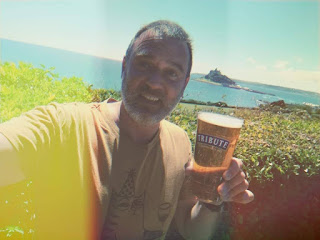