Plans have changed for a number of reasons 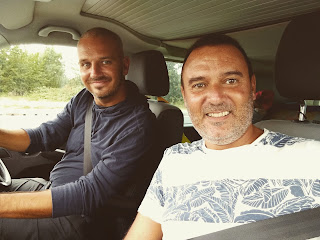 We left Oleron island three days early. Our good friends Jules and Pete were staying in their VW camper four hours away in the Loire Valley when Pete suffered a heart attack and then a stroke. We couldn't leave Jules on her own while Pete was in hospital even though everyone on her campsite was rallying around to support her. After waking to her latest update via text I told her we were on our way and we packed up and headed east. Huttopia were kind enough not to charge us the final three nights.

The small campsite she was staying on was full but the owner said we could share their spacious pitch and there was more than enough room. We immediately became a 'bubble' - hugs were needed if nothing else.

On Thursday, the sixth day of our stay with Jules, we were able to accompany her to collect Pete from hospital and we enjoying a nice evening together when Jules read the news that the UK was adding France to its quarantine list from 4am on Saturday. We were expecting it to happen eventually but it was cruel to be so sudden and we were faced with the choice of staying on until Monday and then spending the last two weeks of our holiday confined to home, or getting back by the deadline and continuing our campervan travels in the UK.

Tony immediately tried to book a Eurotunnel crossing for the next day but the website kept crashing under the strain of so many others trying to do similar. He eventually got a slot at 10.15am for the next morning. On the other hand I wasn't ready to leave Jules and Pete and this fuelled an argument between Tony and me. It was 11.30pm at night, we had so much stuff to pack up in the dark and things were wet from rain that afternoon. We'd have to be on the road by 3.30am to make Calais in time. It wasn't really the time for rational thinking and only now we're back in the UK did I think of another option, to stay on until Monday and then leave for Germany where the Zingst peninsula would be enjoying sunshine, crossing France only for transit on our return journey.

Anyhow, we arrived home at 1.30pm on Friday afternoon and put the bedding in the wash before opening our laptops to see if we could find any availability on campsites in Wales. Both the Camping and Caravan Club and the Caravan and Motorhome Clubs had several sites with free pitched. Both clubs were stating that shower and toilet blocks were closed. the C&MC said you couldn't use shower tents on its Welsh sites either, so I phoned two C&CC sites that appealed and they both confirmed that we could. So we booked those for four nights each and our favourite independent site in the Black Mountains for another four nights.

We're back on the road again at 8.30am on Saturday with 12 nights of hiking and biking in Wales ahead of us, plus a bonus three nights in the Chilterns on the way home. We've got unexpectedly clean bedding and towels for the last two weeks too, so it's not all doom and gloom.

Hopefully we'll have a few video chats with Jules and Pete while they work on their own exit strategy and they both know we are thinking of them all the time.