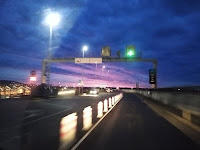 We're an hour away from Spain, having travelled the entire length of France since early this morning. We left home in the dark at 4.30am and have been driving for over 14 hours. We've chosen a camping spot just across the border where we are scheduled to arrive at 9.30pm.

Our destination this year is Valencia in a complete change to what we usually do at this time of year! Much as we'll miss Les Deux Alpes this winter we decided on sun and not snow. We settled on Spain, and Valencia in particular, less than a week ago after closely following the weather forecast.

Tonight we're going to stay on a private aire which appears to be a huge field that, unusually, also accepts caravans as well as motorhomes. It's 10 euros per night which we may or may not get to pay. Reviews seem to suggest someone comes around to collect it in the evening and there's no facility to pay if you're not there at that time. I should start a notebook of how much we owe and to whom. It's been a long day though as I suspect we'll pop up the roof and go straight bed when we finally pull up,

It's only a four and a half hour drive tomorrow to Valencia. We've not booked a campsite which may or may not have been wise. The one we'd like to stay at now seems not to have electric pitches available for the first two nights. The other option we found is a little further away from the town as we'd like. It's still anybody's guess where we'll end up!

There'll be sightseeing, maybe some beach time if it's warm enough, plus cycling as we've brought the bikes and the countryside seems set up for some nice rides.