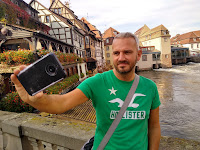 I've wanted to return to Strasbourg since last visiting four years ago. We had a whole week there in October 2015 and we returned for three nights in October 2019. We booked a pitch at CityKamp Strasbourg for the last nights of our half-term road trip that had also seen us visit Paris and Troyes for a real city-break holiday. This is the same campsite we were on last time, having been rebranded from Camping Indigo but still a part of the Huttopia chain. The site sits surrounded by trees on the outskirts of the town centre just to the south west. There's a little noise on this site but it's more a distant hum of city life and nothing that would spoil your stay. A train passes occasionally and church bells strike the hour. It's a trade off for being so close to such a beautiful city.

Strasbourg will have your phone in hand snapping photos at every corner with its cobbled streets and colourful mix of Medieval, Renaissance, Romantic and Art Nouveau architecture. It became a UNESCO World Heritage Site in 1988, the first time this recognition applied not to a single monument but to an entire historic centre of a city. 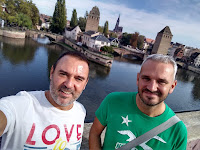 We headed straight for the old town as soon as we were pitched. It's only a 25-minute walk from the campsite and your first glimpse of the colourful half-timber buildings of Petit France will be as you cross the Georges Frankhauser Passage, a bridge across the River Ill. On our last visit we crossed the bridge at street level, but this time the upper level, two flights of stairs up, was open for even better views of the old town.

Having packed so much into our full-week trip the last time it was hard to know where to start, but we settled on mooching around the old town, wandering along the canals and popping into a few shops. We sussed out when happy hour would be at our favourite bar before heading back to camp to shower and change for the evening. 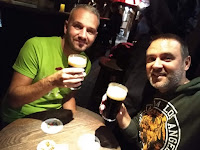 Les Berthom is a quaint timber-beamed bar in the centre of Strasbourg. It has a huge menu of beers to choose from and lovely relaxed, small and friendly atmosphere. Happy hour is 7-9pm Monday to Thursday. We rarely drink in bars in France on account of prices being double what we are used to paying in the UK. Happy hour though makes the drinks a reasonable price, on par if not a little cheaper than at home. Plus you'll rarely find strong (7-9% ABV) Belgian beers such as our favourite, La Chouffe on tap at home. It's table service and the friendly, English-speaking waitress kept small bowls of nuts coming. A few tables ordered the saucisson, served simply on a board with a knife, for five euros. We had three pints or thereabouts - it's millilitres but almost fills the pint glass. Before determining we ought to stop there.

We made plans for our two full days based around the weather. On the Friday, which was due to be overcast, we walked around the old town until midday when Le Grand Shanghai buffet restaurant opened. For £22 we both had all you can eat Chinese food with plenty of choice for Tony who is pescatarian. In the afternoon we followed the canal to Parc de la Citadelle and then along to the Rivetoile shopping centre which we'd seen on our last trip but not ventured into. After a day of walking around Strasbourg we enjoyed some beers in the warm evening sun outside Cleopatra back at the campsite. 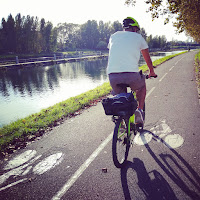 Saturday was sunny all day long and we made it a cycling day. The campsite sits on a cycle route and within minutes you're in the countryside. We chose to cycle the Piste des Forts, The Forts Trail. This 85km cycle route takes in heritage and nature in and around Strasbourg. It has sections on both sides of the Rhine including the 19 fortifications making up the Ring of Forts. The well-signed cycle route is a wonderful way to escape the city to places you'd not have discovered otherwise. We were on our bikes by 10am while it was still a little hazy. The sun soon came out and, as our stomachs started to rumble, we sought out a bakery, purchasing a chocolate filled pastry with an almond frosting each - absolutely delicious.

After four hours of cycling we'd crossed the Rhine into Germany and entered Kehl where we stopped for lunch. I had currywurst while Tony gobbled a large portion of pommes frites. We'd cycled half of the 85km circuit by now and it was 2pm. We decided to leave the route and head back to Strasbourg's centre. As it was the weekend and happy hour at Les Berthom would not be occurring today, we resolved to visit Leclerc and buy up our own happy hour to be savoured in the sunshine. So back at Rivetoile shopping centre we purchased three 750ml bottles of various Belgian beers, including of course La Chouffe. I also convinced Tony (or maybe he convinced me) to buy the Pull & Bear sweater I'd seen the day before but decided I didn't 'need'. 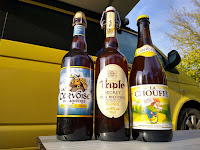 There were a couple of hours of sunshine still left, even if we had to move our chairs around to find it. The beers went down unsurprisingly well and I was in bed by 8.30pm! It made for an early getaway as we headed back to the UK on Sunday.

There is a high turnover of campers at CityKamp Strasbourg. Most people seem to stay a couple of nights. We've now spent a whole week and just a long weekend. Which is best? If you're just looking to see the sights of the town, wander through its parks and along its canals, then you can do that in a couple of days. But there's plenty more on offer if you saddle up and cycle around the many cycle routes out into the countryside. Trains and trams will take you further afield if you're not feeling so energetic too. I know we'll return again and we won't be leaving it four years this time!
Camping City break France Glamping Huttopia Pubs Weather
Location: Strasbourg, France