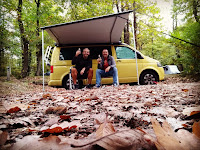 October half term is always a tricky holiday to plan for in a campervan. With only a week you really can't go too far south to find good weather. We researched a few destinations including Britanny and the Black Forest and made up our minds the weather would be the deciding factor.

As Friday evening came around it didn't seem to make a lot of difference where we went - there'd be occasional rain - and so we decided we'd start off not travelling too far. We'd reassess the weather after a couple of days and in the meantime have a city break and visit Paris.

We're big fans of the Huttopia chain of camping and glamping sites and their Versailles site was one of a handful open at this time of year. Our research showed we'd be able to catch a train or cycle into Paris and with plenty of pitches seemingly available we headed there without booking. 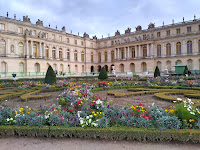 We learned a couple of useful things on this holiday. Firstly Huttopia's online booking fee isn't payable out of season, so we could have booked if we wanted to and it wouldn't have cost extra. Secondly, when we arrived at the reception the lady asked if we had an ACSI discount card, which we don't, but then mentioned the Caravan and Motorhome Club. I had my club membership card and this was enough to bag a discounted rate.

The Versailles campsite is nice. It's on hilly terrain but all pitches have been nicely levelled and so you sit on a terrace under the shade of tall trees - a little green oasis next to Versailles and on the outskirts of Paris. We discovered we were actually pitched right on top of the A86 tunnel, if Google Maps is correct. I think if you consulted a map while looking at Huttopia Versailles you'd be immediately put off, assuming a major road runs right through the middle of it. It kind of does, but it's a long, long way underground. We thought it was quite ironic really, since we do all we can to avoid the A86 due to the 2-metre headroom we can't fit under.

With an afternoon free we went to explore Versailles. The palace is around a 30-minute walk away. While there's a steep entrance fee to look around the palace itself, the gardens are free, usually. It was Saturday and there was one of the occasional 'musical waterfall' days on. So we left the gardens until Monday and continued our exploration of the town. 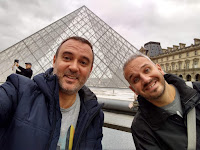 We made Sunday our Paris day, paying around £12 for return train tickets for the two of us. The station is just 15 minutes walk from the campsite and the journey into central Paris is 40 minutes. The double decker train was on time and had plenty of available seats.

We sought out the Eiffel Tower first. The tip was visible as soon as we'd left the train station. Entry to the gardens underneath and around the tower was free after a security check. There was an exhibition, also free to enter, marking the 130 year anniversary. Both Tony and I loved the Lego Eiffel Tower even more than the real thing!

Our stomachs had us thinking of lunch next and so we walked what turned out to be a very long way to the Royal Dragon oriental buffet restaurant. In hindsight we ought to have caught the Metro, but after an amazing lunch we did use the Metro to cross to the other side of the city to see some of the other sights. 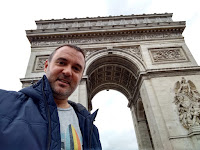 As we walked around Paris we passed numerous electric scooters which can be hired through a mobile app. Most of them were from a company called Lime and try as I might, I couldn't get the app to function and we didn't get to ride on them.

Almost everything in Paris, from shops and restaurants to tourist attractions and street markets, were open for business on Sunday - something you don't generally expect in France. We snapped photos of ourselves outside most of the famous landmarks you'd think of when imagining Paris and caught the train back to Versailles.

On Monday we went to the Westfield Parly 2 shopping centre on our bikes. Versailles is nicely set up for cyclists, though you do have to wait at traffic lights for almost as much time as you spend actually cycling. Despite being on the cycle route, the shopping centre doesn't appear to accommodate cyclists and we were left to lock our bikes to railings at one of the doors from the car park. There is a good range of shops, mostly high end, but we did spend a little money in the Decathlon store and the Auchan supermarket where we bought a picnic lunch. 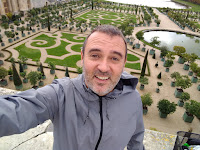 We cycled back to Versailles through the gardens of the palace. There are security gates at all entrances to the gardens but cycles are welcome. We ate our lunch of cheese and bacon baguettes on a bench looking across the lake. After cycling all the way around the lake we locked up our bikes and went up towards the palace where the gardens were now open. They are intricately planned and maze like in places. Some of the best views are looking down on the gardens from the upper terrace. You can spend hours losing yourself in the palace grounds.

We both agreed it was three days of our holiday well spent and we'd definitely pick Huttopia Versailles as a base from which to explore Paris again.
City break France Huttopia Paris