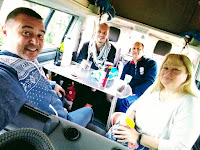 Our loose plans for our holiday quickly came unravelled. We spent the second and third nights as intended at a campsite just outside Poitiers. We didn't think that through properly since the full day we have ourselves to look around the town was Sunday when everything was closed, including an amazing looking board game shop. However the highlight of staying here was that our friends Jules and Pete were able to coordinate a night camping with us on their own way down to Spain.

From Poitiers we were going to travel down France's west coast and have a night at the Pilat Dune and then three nights in the Pyrenees.

Weather forecasts had us rethink. The west coast of France was due for rain and the Pyrenees were just going to be cold. We decided to have a day of travelling and set off for Lake Caspe in Spain, eight hours away.

We were trying not to refuel until we crossed into Spain where's it's so much cheaper. Thinking we've got loads of diesel thanks to the van's range reading we suddenly found the distance to be mostly uphill on winding roads taking us into the Pyrenees. We slowly watched the remaining fuel disappear as we reached the highest point, surrounded by snow. We've never run out of fuel but it looked increasingly like we might do so in the worst possible place. At the summit we freewheeled much of the way down to a small skiing resort where we were pleased to see the expected petrol station open for business.

A further two and a half hours driving brought us to Caspe where we did a small supermarket shop at the amusingly named Orangutan store and then continued the short distance along the southern edge of the lake to Camping Lake Caspe.

It was 4pm when we arrived and we selected a pitch with evening sun, cracked open the beers we'd just bought and relaxed in the warmth we'd hoped to find.

At the campsite reception are printed maps showing three hikes along the shores of the lake. On our first full day we set out on the Route of La Magdalena, a distance of 21.4km. The scenery is spectacular, the lake a deep blue surrounded by the rugged terracotta rocks that make up the landscape. As the walk went on we'd find beautiful wild flower meadows and fields of crops we were unsure of. Our eventual return to the campsite was welcomed by our weary legs some five hours later.

We set out on bikes the following day intending a morning looking around the town of Caspe and then finding somewhere along the lake to hang our hammocks in the afternoon. Only a quarter of the way through the hour bike ride, most of which was up hill, we gave up on our intended first destination and followed a path to the lake shore. We strung the hammocks underneath four trees and enjoyed the lake view.

That evening we checked the weather forecast which showed the best weather being towards Valencia and researched possible campsites. I fired off an email to a lovely looking site called Casa Valerosa and received a reply a short time later confirming our arrival the following lunchtime.