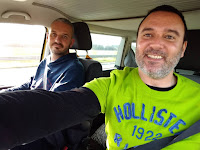 February is a difficult holiday for sun-worshipping Brits who travel by campervan. We only have a week and so there's not enough time to drive to the warmer weather in Spain.

We decided instead that we'd have a lakes or mountains break with hiking and biking whatever the weather. Our morning homeward-bound departure shaped our plans for the end of the holiday - we're going to spend the last couple of nights in Bruges. It kind of made sense to base our first five nights in the same kind of direction, hence our first camping trip to Luxemburg.

Until now Luxemburg has been that country you go through to get to Germany and we've only seen it from the motorway. But PitchUp uncovered several promising campsites and we've picked one in the northern tip of the country next to a canal and forest.

I booked the campsite as we sat in line at the Folkestone Eurotunnel terminal having decided to stick to this plan. We've booked for three nights so we can stay on another couple of nights of we like it and have more to see, or we can head off somewhere else if we like.

We bought ten Eurotunnel crossings at the beginning of January and by this time our preferred traveling days had sold out. No Friday night departure and returning on Saturday and not Sunday. We've checked and rechecked several times in case other options became available but we were stuck with 12.50pm on Saturday to travel from Folkestone to Calais. Of course we have done what we always do and push our luck in arriving too early. This scored us a 10.15am train and is a welcome result!

See you in Luxembourg!