For our stay on the Quiet Site in the Lake District we travelled with our drive-away awning which is a huge beast both erected and stowed in its bag. Storm Brian was about to hit the UK and Google told of 48mph winds in our location but we decided to risk putting up the awning. It was either that or have it in the already-small living space in the van with us.

During the first two nights Storm Brian blew a gale and I didn't get much sleep worrying about the awning taking off. It blew around noisily but, thankfully, remained pegged to the ground. With a rainy week in the lakes the awning gave us the space we needed to dry our soggy clothes. We moved the oil-filled radiator between the van and awning depending on where we were sitting, but in the end most of our evenings were spent in the campsite bar.

We went out each day quite late after cooking a breakfast of Spam, eggs and beans. We walked through fields to Pooley Bridge on the first day. Within minutes my walking boots were soggy with mud of the consistency of melted milk chocolate. We soldiered on and rewarded ourselves with a pint in the Crown pub before tackling the return hike.

On the second day, with the sound of the wind and rain on the awning, it took all our resolve to leave the warmth and dryness and venture out. We opted for a walk around Little Mell Fell. I say around, but the path scaled much of it several times. It was a pleasant, if short, walk, nicely filling the time until the Quiet Bar opened.

Day three started out much brighter and we were encouraged enough to take our bikes for a day's cycling. We went south to Glenridding where we just missed the steamer boat back up to Pooley Bridge. With the options being to wait two hours for the next boat, cycle back the way we'd come, or carry on and cycle the rest of the way around the lake, we chose the more challenging latter.

Now, if anyone is thinking of taking route advice from this blog post, don't. A sign proclaimed the route a footpath, cycle path and bridleway. At some point we must have passed the point at which it was any more than a footpath and we ended up pushing our bikes up and down steep steps in the rock. The sections we could cycle were still uneven and stony and Tony got a puncture. I rely on Tony to carry the puncture-repair kit and he did indeed have it. What he had neglected to replace, after using it for another purpose, was the spanner to remove the wheel. Nevertheless we were able to patch up two small holes in the inner tube, neither of us having any previous experience in doing so. At one point during the process two walkers with their greyhound were passing and the dog took an unexpected interest in the repair we were undertaking. The dog was quickly reprimanded for sticking his nose in where it wasn't wanted. I said to the couple: "To be fair, he probably has more of a clue what to do than us."

With the puncture repaired we continued, mostly walking, along the uneven pathway. When I'd completely had enough I heard a family walking in the opposite direction encouraging the kids by telling them the worst was out of the way - meaning that for us it was still to come. Tony and I resolved to try to get as far as Howtown on the eastern shore by 3pm when there'd be a steamer boat leaving for Pooley Bridge. With 30 minutes to go we'd reached a road leading directly down to Howtown pier. I say directly, but it was a steep hill and the road consisted of several hairpin bends as it wound its way down to the shore.

Tony had fallen some way behind and, back on a straight having just whizzed around one of the many bends in the road, I glanced over my shoulder to see if I could see where he'd got to. I couldn't spot him and I'd only taken my eyes off the road for a split second, but turning back to the road ahead I could foresee but couldn't stop myself from mounting the verge. I didn't just mount it either; I careered all the way up the grassy bank before flying head-over-heels over the handlebars. It seemed to happen in slow motion as I sailed through the air completely detached from my bike. I landed back on earth with a gentle bump in a soft bed of autumnal-gold ferns. I was laying on my back looking skywards and, for a couple of seconds, I smiled to myself. I wasn't injured and the little accident had been kind of exhilarating, like a theme-park ride. My enjoyment of the moment was short lived however, as I heard a car coming and realised both me and my bike would be visible to the driver. "Please don't stop. Please don't stop," I repeated to myself in my head.

The car stopped. As did another one behind it. Two car doors opened. I was clearly not going to escape my bicycle accident without considerable embarrassment. I sat up and as the lady in the first car came into view I said: "I'm fine," in the kind of tone that said she could carry on about her business if she wanted.

"He says he's alright," she told the driver of the second car, who I couldn't yet see. "We need to get you up," she told me. "Then you can decide if you're alright."

The second car's driver was a man in his late twenties. He was grinning and joked with me about my death-defying stunt as he pulled me up. I explained that I'd just turned back to see where my companion cyclist has got to, hoping that they'd leave me alone, but they wanted to check my bike was working and for me to establish that I'd not broken any bones. Tony finally showed up as I'd just managed to convince both of my good Samaritans that everything was in working order. He looked puzzled as to why I'd stopped and was talking to these people.

After the cars had driven off I was able to explain to Tony how the whole thing was his fault for cycling so far behind.

We had ten minutes to spare to catch the steamer boat to Pooley Bridge. Though we'd have liked to have gone into the town to buy some meat to cook for dinner, I didn't have the stamina to add any unnecessary mileage to the final leg of the journey home. We showered, played boardgames in the bar and had custard cream biscuits and midget gem jelly sweets for dinner. 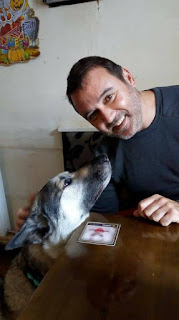 Our final day was expected to be wet and windy and so we decided we'd get the bus to nearby Penrith. It cost £8 each for a return ticket and Penrith turned out to be quite disappointing. Mooching around the shopping streets can be dragged out into an hour at the most. Tony identified that just outside the centre of town was a branch of Go Outdoors where we might find a replacement inner tube for his bike. On our walk there we passed what remains of Penrith Castle, free to walk around. We filled the time before the bus back to camp with a pint of real ale in the Druid Arms. You're spoiled for a choice of pub in Penrith - probably because there's so little else to do there. Sadly all of the pubs we passed had fruit machines and the threat of sport on the telly. The Druid Arms seemed like a good bet, though it smelled musty and smoky and turned out to have a dartboard. We were the only drinkers though, sharing the bar only with the landlady's friendly Alsatian who came over to say hello.

Having been wet and windy for almost our entire five-night stay in the Lake District the weather was due to improve considerably for the remainder of the week. We checked the weather in the north of Scotland, where we were due to journey the next day for a four-night stay, to find we would be better off staying in the lakes. So we changed our plans and decided to head a little bit west to Eskdale.

Watch the vlog of our Lake District camping trip