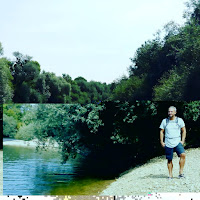 We used Huttopia's La Plage Blanche as a convenient stopover on our way south. The intention was we would go to Switzerland but the forecast for rain all week prompted a change of plans. Quite a major change of plans since Tuscany, where the sun is, is quite a distance further than Switzerland.

Anyway, this blog post is about Le Plage Blanche, which translates as the white beach. The site is nowhere near the sea, being in the east side of France, not far from Dijon. We spotted the beach just as we arrived, at the bank of a river where many people were swimming. There is a perfectly good pool on site so I have no idea why. 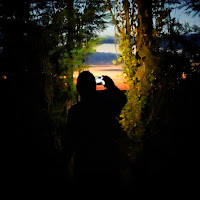 Our pitch for our brief stay had a countryside view across fields. You can pay slightly more for riverside pitch. Opposite our pitch was a trailer tent with a couple who drove away with their bikes on the car roof just as we arrived. To our left a British motorhome was our nearest neighboring three pitches away. I knew them to be British when the mother was chastising her four-year-old son for having crossed the road on his own.

"You do not cross roads on your own, do you understand," she was saying.

It sounded simple and I think we all understood until she added: "You can cross this road but not the next one." Again she asked: "Do you understand."

I'm not a parent, but I think having different rules for different roads is just asking for confusion. Whether we understood or not, we'd all heard her.

After several hours driving in our air-conditioned bubble, just a few minutes getting ourselves set up on site in a rather warm, humid condition we had a little sweaty so we had a swim and then a shower.

We took the opportunity to do a little exploring by bike. There are footpaths both side of the river and we cycled to Belmont, the next village to the west. There we stopped to climb up to the church before crossing the bridge and following the river back on the opposite side.

Keeping our eyes peeled for a nice little river-side beach we finally found one and locked up our bikes for an hour sunbathing.

Cycling back we saw what I assumed was the start of our campsite. After cycling for quite a distance I saw a green and white sign for another campsite. I was about to comment to Tony how cheeky this other site was to use the same font and colors as Huttopia when I realized it was actually our site.

We spent the rest of the day sitting outside of Cleopatra reading our Kindles. Coal tits sat in the trees and bushes occasionally flying under Cleopatra's awning.