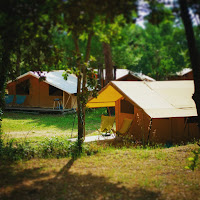 After three glorious sunny days at Domaine Les Gandins in the Auvergne we packed up to drive west, following the sun to Ile d'Oleron on France's west coast. One of the benefits of holidaying with your campervan is the ability to plan your trips around the weather. The forecast had been correct in predicting the sun and it was to rain shortly after our departure. However the expected storms had already passed over the west coast and so we booked, just a day head, into Huttopia Les Pins.

This was our fourth trip to Ile d'Oleron in three years. On the previous occasions we've stayed at Huttopia Chenes Verts and we'd have liked to have stayed there this time but unfortunately the site wasn't yet open for the season. Huttopia Les Pins is at the southern tip of the island and had been open just a few days prior to our arrival.

When we entered reception you could have been forgiven for thinking that the staff had only started on site that day. A hand written sign displayed the reception opening hours and there was just a desk empty of everything but a computer. Two ladies seemed surprised to see us, though they had a pitch tag for us. Outside the entry and exit barriers were undergoing maintenance. We drove in the out barrier to avoid the staff car in the entrance and set off around site to pick a pitch. Only one other pitch was occupied. A Dutch couple were camping in a tent-like contraption atop a Land Rover. We liked the look of a spot two pitches down from them, but it seemed strange to pitch so close to someone else when the whole site was unoccupied.

We take a number of things into consideration when picked a camping pitch. Ideally we'd like the pitch to have sun all day, and be not too near but not too far from the toilet block. If the site has recreation facilities then as far away from that as possible. We drove around the site, almost settling on a spot not far from the only open block of toilets and showers. Tony manoeuvred Cleopatra into a number of different positions on the pitch, but in the end we decided we were settling for second best and we headed back to the pitch near the Dutch couple. It was almost as far away from the toilets as you could get, but it was a fabulous pitch on a raised section of ground, surrounded by tall pine trees, with great sun potential and a nice view across the site. Ensuring the leisure door was facing south nicely angled Cleopatra so we weren't intruding on the only other campers.

By 4pm we were ready to explore. We've cycled around almost all of the island but the part in which we now found ourselves so it was a novelty to visit some new places. Heading to the nearest bit of beach took us to Grand Plage. We locked our bikes next to a car park and set off on foot. A small train track ran alongside the beach and the train was running four times a day. We prefer a beach to be quieter and less commercial, but it was pleasant nonetheless. With such a huge expanse of sand I guess you'd easily avoid overcrowding in high season. We walked north towards Plage de Vert Bois. Even a short walk from the car park will usually find near-deserted sections of beach, but here, the train meant people were reaching even as far as a 45 minute walk away. We continued on almost as far as our favourite spot on this long beach that we'd cycled to from Huttopia Chenes Verts. We retraced our steps back to the bikes and determined that cycling further the next day would put our favourite beach spot in reach of our new campsite base. 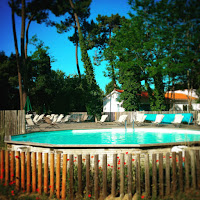 Back on site and hot from cycling we jumped in the pool. Again there were a few tell-tale signs that the site was only just gearing up for the season. The two pools were open but needed cleaning along the water line. We couldn't understand why they would open the site before it was really ready. It was as if they didn't want to turn away custom while there were staff on site. It didn't spoil our enjoyment though and it was nice to have the site almost to ourselves.

During our five-night stay about four or five pitches became occupied and on our last evening some of the safari tents welcomed visitors too. Also during our stay the other Huttopia site on the island opened for business. I'd recommend either site, but Chenes Verts will always be our preferred choice. It has no pool, but it's right on the beach and in an otherwise untouristy area.

On days two and three we spent full days sunbathing on the beach. We were sad to find that the pebble walls people had built and that we used to sit behind had washed away, but over the course of a couple of days we rebuilt one. The sea was warm enough to swim in despite it still being May, and a few other people were enjoying the beach with us. 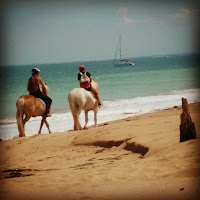 On day four we decided we'd go for a bike ride and cycled as far north as Plage de la Gautrelle, stopping along the way at the villages of la Cotiniere and St Pierre. In la Cotiniere we couldn't resist popping in to Decathlon, and we visited the open-air market to buy two peaches - our healthier alternative to eating an ice cream. In St Pierre we both bought a shirt from Jules, before cycling on to the beach.

Rain was forecast on our last full day and so it was to be a full day of cycling. Le Chateau d'Oleron was our destination but we took the opportunity to cycle via Saint-Trojan-Les-Bains on our way. It turned out to be a lovely little town, the hand painted signs for hotels and restaurants one of its quirky highlights. And a handsome little cat who came bounding over to see us for some fuss! The visit saw us tick off the last of Oleron's larger towns we'd not visited.

La Chateau is my favourite town on the island with it's impressive castle and the beautiful and colourful shacks on the harbour that house bars, restaurants and art shops. We took shelter in a cafe, ending up with the smallest coffees imaginable - getting an Americano in France is still not something we've mastered. When it became clear it wasn't going to stop raining we donned our cagoules and braved it.

One of Oleron's best features, aside from its never-ending beaches, are the cycle paths that criss-cross the island. Wherever you are, and wherever you want to go, you can be almost certain a cycle path or two will get you there. They're not always the most direct route as they zigzag across the countryside, but they keep you off the roads. However, many of the paths are chalk and when it rains it makes a mess of your clothes. I could see the state Tony's back was getting in and hoped my new shirt bought the previous day wasn't getting ruined beneath my cagoule.

While on the subject of cycling, I learned that moron is almost the same in French as in English when another cyclist used the word to describe Tony. We were coming up to a blind corner and I ran my bell twice as a warning in case anyone was coming the other way. Unfortunately the reason for me ringing my bell was lost on Tony and rather than approach the corner with more care, he turned around to look at me, almost crashing head on into a French cyclist who was spot on with his name calling.

It continued to rain for another hour after we'd returned to Cleopatra but then turned into a beautiful evening. We let the chorizo and garlic sauce for our pasta dinner cook slowly in the pot while we enjoyed bottles of beer in the sunshine. After the pine trees blocked out the rest of the sun we made preliminary preparations for the next day's departure for home. I found time to wash my shirt with a tube of travelwash we've been carrying around since we first had Cleopatra. We carefully determined what we'd need access to before packing the boot and putting the bikes on the bike rack and when we'd done all we could do, watched the sun set with a glass. of wine each.