What a difference six weeks makes in the French alps. We took Cleopatra back to Camping Caravaneige Le Champ Du Moulin near Les 2 Alpes in the middle of February, having spent a week there at Christmas.

This was actually our third visit, and the second visit skiing. This time it was far snowier, but also busier, being both French and UK holiday weeks.

Equipped with our own skis and still learning on the free baby slopes, it was an inexpensive week of skiing. We each bought a six day walker's cable car pass for 52€. A ski pass would have cost about eight times more. Clearly on a walker's pass you can't carry around your skis and so before checking in at the campsite down in Venosc, we drove into Les 2 Alpes where Brun Sport offer ski lockers for 26€ for a week.

With our skis stored in the resort, we had a cheaper and easier ride up and down in the cable car between Venosc and Les 2 Alpes each morning and night.

Our days ran almost like clockwork. We'd get up at 7.30am and put the kettle on while we showered. By 8am we'd be walking five minutes to the Venosc cable car station and riding up into the ski resort. Brun Sport would be handing us our skis and ski boots around 8.35am and we'd arrive at the Petit Viking beginner's slope just as the drag lift started up at 8.45am.

The biggest difference over our visit at Christmas was how busy the slopes were. We'd hardly had to queue for the drag lift on the Petit Viking on the previous visit, whereas in February half term, by 10.15am ski school groups of children were making the queue hard to put up with. So we would ski until 10.15am, by which time our legs ached anyway, and the smell of croissants from the neighbouring cafe were too strong to ignore. 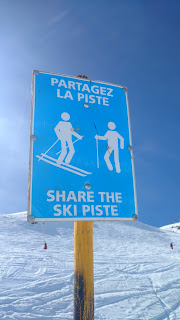 Skis and ski boots returned to their lockers we would then order coffee and croissants in town before, at around 11.15am, getting a ski lift to the top of the west mountain of Les 2 Alps for a leisurely stroll down the snowy hillside.

Skis lifts are designed for skiers, and though they cater to walkers, once you get to the top and are expected to get off, walking boots rather than skis are a considerable disadvantage. You can only hope the attendant at the top notices the absence of skis and slows down the lift to give you more time to get off and out of the way before the chair whacks you on the head and you slip on the ice.

The walk down the west mountain is lovely. It's well signed and the path descends gently, occasionally crossing paths with skiers. In some places numerous walkers have created compacted ice on the path making it slippery and more preferable to seek firmer footings in the snow at the edge. You just have to accept that every tenth step will land you knee deep in snow. 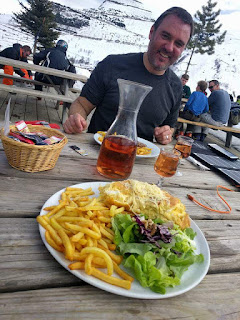 By 12.30pm we'd arrive at La Bergerie Kanata for lunch. They remembered us from Christmas and our litre carafe of rose wine we always order to accompany our lunch. We were definitely now accepted as valued regulars and rather than presenting us each with a cup of Genope liqueur when bringing the bill at the end of the meal we'd be greeted with one as we sat down, and often another one or two before asking for the bill.

We ate our way through more of the menu, including our favorites of steak frites and the house pie, and trying things we'd not yet had. Tony had a huge pot of moules (served with chips and a beer, all for 17€), and a huge faux fillet, which is not a fake steak like it sounds, but a cut similar to sirloin that doesn't exist in British butchery.

We'd settle the bill and take the remainder of our carafe of wine to the deck chairs and soak up the sun until 2.30pm when we'd walk the rest of the way down the mountain and back into town where the outdoor pool was just opening for swimmers at 3pm.

Around 4.15pm we'd enjoy the last of the sun, drinking vin chaud, mulled wine, from an Italian delicatessen in the high street, or a large cold glass of Heineken from a snack bar further down the road.

Finally around 5pm we would take the cable car back down to Venosc where Cleopatra's own heater plus an oil-filled radiator, and electric blanket on the back seat, would have us snuggly warm for a boardgame or two and maybe an Amazon show on the Kindle Fire before bed, ready to get up and repeat the process.

There's something satisfyingly relaxing about getting into a familiar routine. By our third full-week's stay we've found the things we like, so why stray from the old routine? 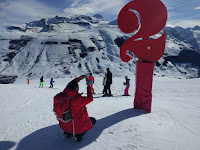 We threw a couple of new things into the mix. One day we took the Diable ski lift up the east side where the map showed another path for pietons, walkers. The path might have existed in real life too, but we couldn't find it. We started out where we thought it should have been but wisely gave up soon afterwards. Walking down a snowy mountain, away from the skiers, when you don't actually know where you're going probably isn't wise. We clambered back up and took the Diable lift down again.

And then another day we purchased 3€ sledges, only to be told off both top and bottom of the ski lift because they're forbidden on the ski slopes. We hid them in our backpacks until after lunch when the litre of wine and several genopes got the better of us and we joined several other sledgers breaking the rules.

The weather was outstanding once again. We had just one overcast day and six days of coats-off, sleeves-rolled-up, full sun.

We left Venosc at 7am this morning and expect to arrive at the Calais Eurotunnel terminal around 2.45pm but I'm pretty sure we'll be back in Les 2 Alpes this Christmas.