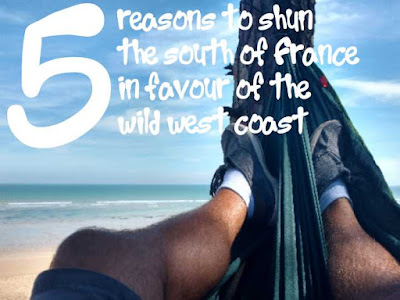 The French coastline is almost 3,500 kilometres long and yet most holiday makers looking for a beach holiday automatically think of the south of France as the be all and end all. For the last three years, in our campervan, Cleopatra, my partner and I have holidayed all around France and we believe you should shun the south coast and go west. Here are the top five reasons why: 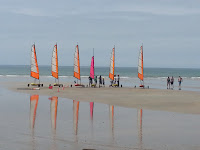 1. Beaches
While undoubtedly the sunniest beaches in France are to be found in the French riviera, they are more likely to be pebbly than sandy. Swap the Med for the Atlantic though and you'll find the coastline is uninterrupted sandy beach, backed by huge dunes and forest. It's a nature lover's paradise.

If you still crave a little civilization you can't go far wrong than staying in Arcachon where the well-heeled of Bordeaux spend their weekends. After spending a relaxing day on one of the sandy beaches you can retreat to a beach-side restaurant to enjoy the locally-farmed oysters. A holiday highlight not to be missed is taking the small boat across to Cap Ferret and lazily exploring its little oyster farming towns, and if it's sand you crave, the Dune du Pilat, the tallest sand dune in Europe, is just 15 minutes by car, a 45-minute ride along well-maintained cycle paths, or a two-hour walk away.

2. Solitude
Whether you choose the Carmargue or the Côte Bleue the chances of discovering a stretch of beach all to yourself are virtually zero. With tourists in their millions flocking to the south coast the beaches can be standing room only. And, with new-build holiday resorts being erected all along the coast since the 1960s, the towns are often a let down, overcrowded and with little character.

While you'll find busy towns on the west coast, they merely serve to occasionally punctuate the vast  sandy shoreline. From Soulac-sur-Mer to Biarritz, the lengthy sections of beach in between urbanizations are untouched and unspoiled. Park up between towns and follow one of the dozens of sandy tracks towards the Atlantic. In all likelihood you'll approach the beach from the top of a dune, so it's not for the feint of heart, but if you really want to bagsy a bit of beach that's yours and yours alone just a little bit of effort will be more than rewarded. Alternatively join the beach at one of the towns and walk along the beach until the sun worshipers begin to thin out -  most people seem content to sit like sardines within 100 metres of the car park anyway!

3. It's cheaper
South-coast cities Nice, Montpelier and Marseilles all feature in the top five most expensive cities in France. From accommodation to dining out, a holiday on the south coast is going to hurt your wallet.

Being smaller and less touristy, the towns of the west coast are less pricey too. For the really budget-conscious traveler some of France's best campsites can be found dotted along the shoreline so you can roll out of bed and onto the beach without breaking the bank.

4. It's not as far
Calais to the south coast of France is a ten-hour drive at the least. Head as far as Nice and you'll be on the French roads for nearly 12 hours. You can be on the west coast, in La Rochelle, in seven hours from Calais and with less of the drive being on expensive toll roads. 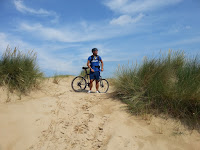 5. Island hopping
The west coast of France more than caters for anyone wishing to holiday in an island paradise, no planes or ferries necessary. The islands of Noirmoutier, Ré and Oléron are each a little piece of utopia with everything you'd expect from an island getaway while each being connected to the mainland by bridge. You can literally drive over to your island holiday destination. Each island has an abundance of sandy beaches and genuine character.

Noirmoutier, off the coast of the Vendée is the smallest of the islands but still boasts 40 kilometres of beach. Further south, just across from La Rochelle is the slightly larger Île de Ré. This fashionable island is sometimes described as the St Tropez of the Atlantic so expect it to be a little pricier - its 3km bridge from the mainland is the only one of the three with a toll too. Finally, Île d'Oléron is the larger of the three islands and is, in fact, France's second largest island after Corsica; you can lose yourself for days pedaling from town to town across its network of cycleways.

Ready to find out more?
I've blogged about all the wonderful west-coast places mentioned above from our previous road trips:

Easy Oléron - France's second largest island is laid back and relaxed with plenty to do and see should you be able to tear yourself away from any of its lush sandy beaches.

Noirmoutier - Perfect for a day trip or longer visit, a small island joined to the mainland by bridge and tidal causeway boasts 57 kilometres of beach.

Lac D'hourtin - Stay slightly inland where you can enjoy swimming in the beautiful lake or hike or bike to the deserted beaches between Hourtin and Lacanau.

Landes Sud - The second most southerly department of the west coast with the largest maritime-pine forest in Europe. The coast continues to be miles upon miles of beautifully sandy beach punctuated, only very occasionally, by access over the dune behind.