We love Brighton but the campsite on the edge of the town, Caravan Club site Sheepcote Valley, leaves much to be desired. So we were delighted to discover Housedean Farm nestled in the South Downs and just over an hour's cycle from the centre of Brighton.

The site is just off the A27 between Falmer and Lewes and we turned off just before those traveling all the way into Brighton itself would become stuck in the nightmare that is Brighton's snail's pace traffic.

We were allowed to choose our own pitch and all have great views across the hills. It's a hilly campsite and you'll be hard pressed to find a pitch that's completely level, but we travel with levelling blocks and achieved a nearly spirit-level standard position. Although the views are rural, you can hear the hum of the A27.

The blurb tells would-be campers there are 'rustic outdoor showers' which kind of worried us but, while you might have the wind whistling around your ankles, these were some of the best campsite showers I've experienced with lovely, piping hot water, fully adjustable and not on a push-button timer. 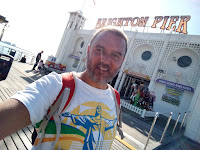 The site is perfectly situated for days out in Brighton. There are bus stops just outside, on the A27, but for the more energetic, the South Downs Way, also adjacent to the site, will take you through beautiful countryside, right into the heart of town. You'll need a mountain bike as the path is mainly geared for walkers, but there are no stiles to cross and we found we could make the journey in a little over an hour. In both directions the path has you climb to a peak at the communications tower on top of Castle Hill. The return journey is easier as the gradient is gentler, before you hardly need pedal all the way down the other side.

Reaching the peak and seeing the English Channel with all of Brighton in the distance was amazing. I loved that we were camping somewhere that felt rural and yet Brighton, where we enjoy spending days at a time mooching around, was so close by. The South Downs are a joy to cycle (or get off and push) through. I especially enjoyed the ride as the sun was still low in a cloudless sky early one morning - a true glad-to-be-alive moment. That a couple of cows in a field we cycled through came close enough for me to scratch their heads was the icing on the cake. 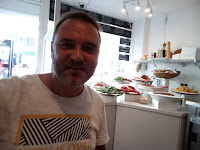 There's far too much to do and see in Brighton for one day and fortunately we were staying four nights and had three full days. Each day we locked our bikes next to the pier before exploring the shops and the lanes, sitting on the beach in the sun, and taking advantage of the pubs and restaurants.

We had lunch twice in our favourite Brighton buffet restaurant, Foodilic,where it wasn't until I'd finished eating a chunk of rustic bread that I remembered I'd been stroking a cow. On our third day we enjoyed a tummy-filling breakfast sitting outside in the sunshine at the West Quay in the marina.

The weather was nice enough in the evenings that we wanted to be back on site, sitting outside the campervan with a few beers and glasses of wine.

Housedean Farm encourages campfires and each pitch has a fire pit. These are fixed into the ground though, and so do have the disadvantage of further restricting where you site and how you orientate your tent or campervan.

It feels like proper camping when it gets dark and you can see the dancing flames of the camp fires throughout the site. (Whereas on the Caravan and Motorhome Club site, everyone would have been shut inside a white box watching television).

We used our log-burning stove, which has the benefit of a tall chimney to direct the smoke away from you, but I'm afraid there were so many other campfires that we still went to bed smelling of smoke!

We were gifted free logs and kindling by some kindly campers who left part bags of each outside our awning one day while we were out. On our second night, while exploring the site to find the perfect pitch to request next time we stay here, at the top of the hill some backpackers had left supplies to reduce the weight they were carrying. Beans and beer - two cans of each. We never look a gift horse in the mouth, even if the beer was Fosters.

Pitches at Housedean Farm are nicely spread out and this was a welcome antidote to last weekend's sardine-like experience in the Yorkshire Dales. There were still a few children running around, but it was Coughing Man who'd prove the biggest annoyance. He was dropped off around the same time as we arrived on Friday afternoon, probably by his wife who had grown exasperated by his constant coughing, and set up two tents, presumably one for himself and another for his phlegm. He sat outside for the whole duration smoking and coughing.

I can't finish this blog post without mentioning Stuck-in-the-Loo Girl. It was dusk and I was paying a visit to the loo to empty my bladder of beer when the first door I tried was locked and a little voice said: 'I can't get out.'

I asked if she'd tried turning the lock both ways and when she said she had I asked which tent she was from so I could fetch Mummy and Daddy.

We turned our chairs around for the ensuing drama, which lasted nearly 30 minutes during which time she was told to keep turning the lock this way and that to no avail. I overheard her parents telling someone else she'd got locked in the same toilet the day before. I decided not to use that one anymore just in case.

It was a fabulously relaxing four days in the beautiful South Downs and we're so pleased to have discovered this site. We've made notes of the pitch numbers we'd request next time and look forward to coming back very soon.